As the acquisition of Asda by TDR and EG Group looms ever closer, it has been fascinating to watch the supermarket chain really push itself in terms of innovation and reinvention over the last year or two.

As the acquisition of Asda by TDR and EG Group looms ever closer, it has been fascinating to watch the supermarket chain really push itself in terms of innovation and reinvention over the last year or two. Some of this innovation has been tech-driven; other initiatives have been aimed at right-sizing macro space in stores while adding differentiation; while the third tranche of moves could simply be described as doing the right thing for customers.
The bulk of technology-enabled innovation has taken place at Asda’s Supercentre at Stevenage, a unit that has been designated as the retailer’s innovation store. The outlet has seen a broad variety of technology-based enhancements over the last 18 months, including the introduction of holographic signage and an automated click & collect parcel machine, the launch of a wine recommendation app that surveys shoppers on flavour preferences before suggesting wines to pick up instore, a personalised chocolate card machine, a Perfume Point fragrance kiosk, customer service call buttons, the introduction of electric delivery vehicles and new electric car charging points.

Another significant deployment has been a trial of Electronic Shelf Labels (ESLs) across 22,000 grocery SKUs. The deployment has been said to have delivered several benefits for Asda such as improved in-store efficiency, lower labour costs, and reduced wastage. From a shopper vantage point, the use of ESLs has really improved clarity while at the same time supporting Asda’s value messaging by flagging up promotions, multi-buys and price Roll Backs. 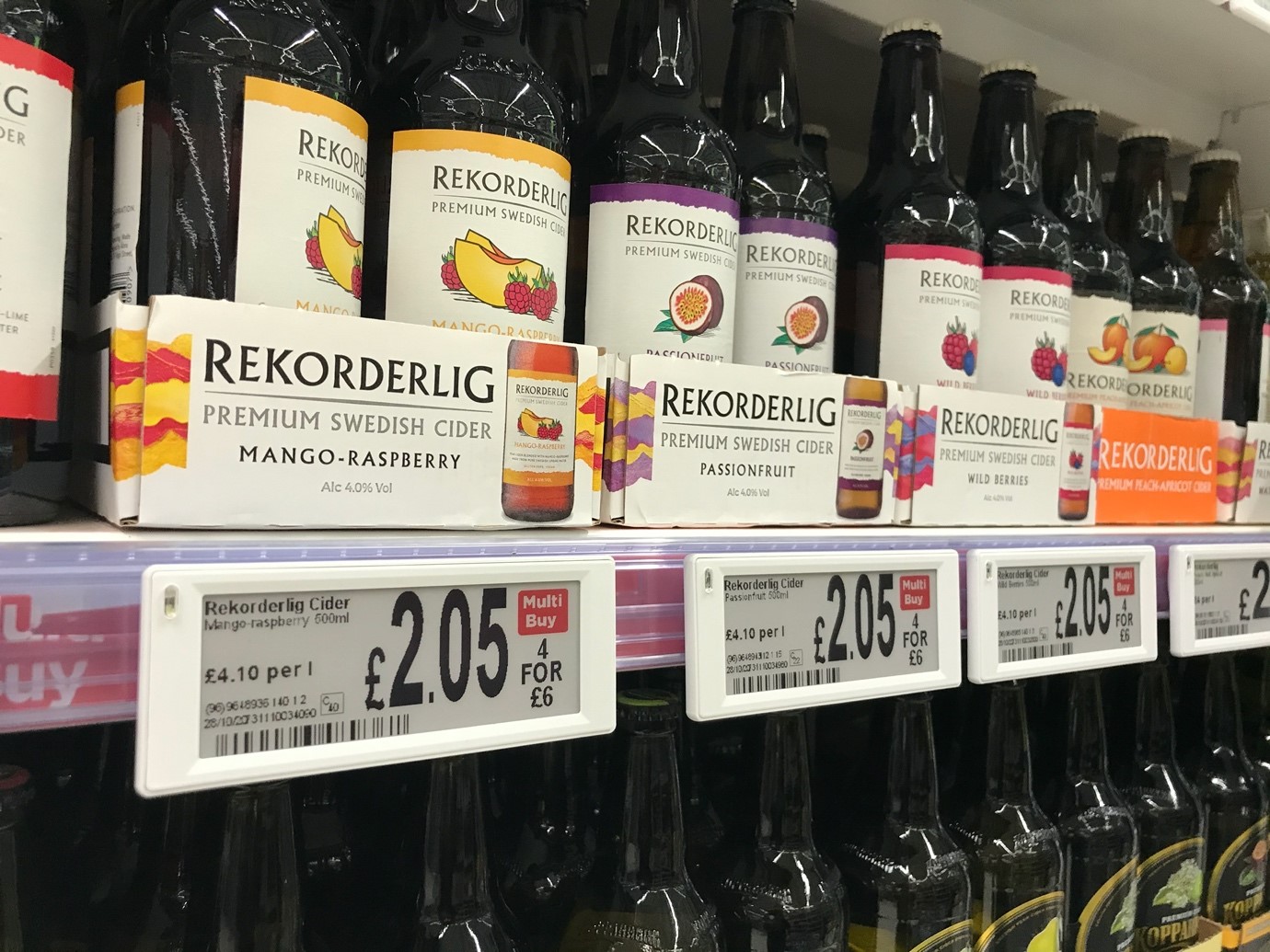 Another innovation, which has also been introduced to a broader number of stores, has been the introduction of digital signage. This move has been spearheaded by dairy company Müller to activate digital signage in the yoghurt aisle in around 30 stores across the country. The initiative might well be considered successful, as it has reportedly achieved better compliance and longevity than cardboard signage and has been better able to tie in with the brand’s other marketing endeavours like TV ads and social media. Digital signage has been adopted by other Asda suppliers, with Mr. Kipling, Heineken and PepsiCo also launching deployments over the last year or so. 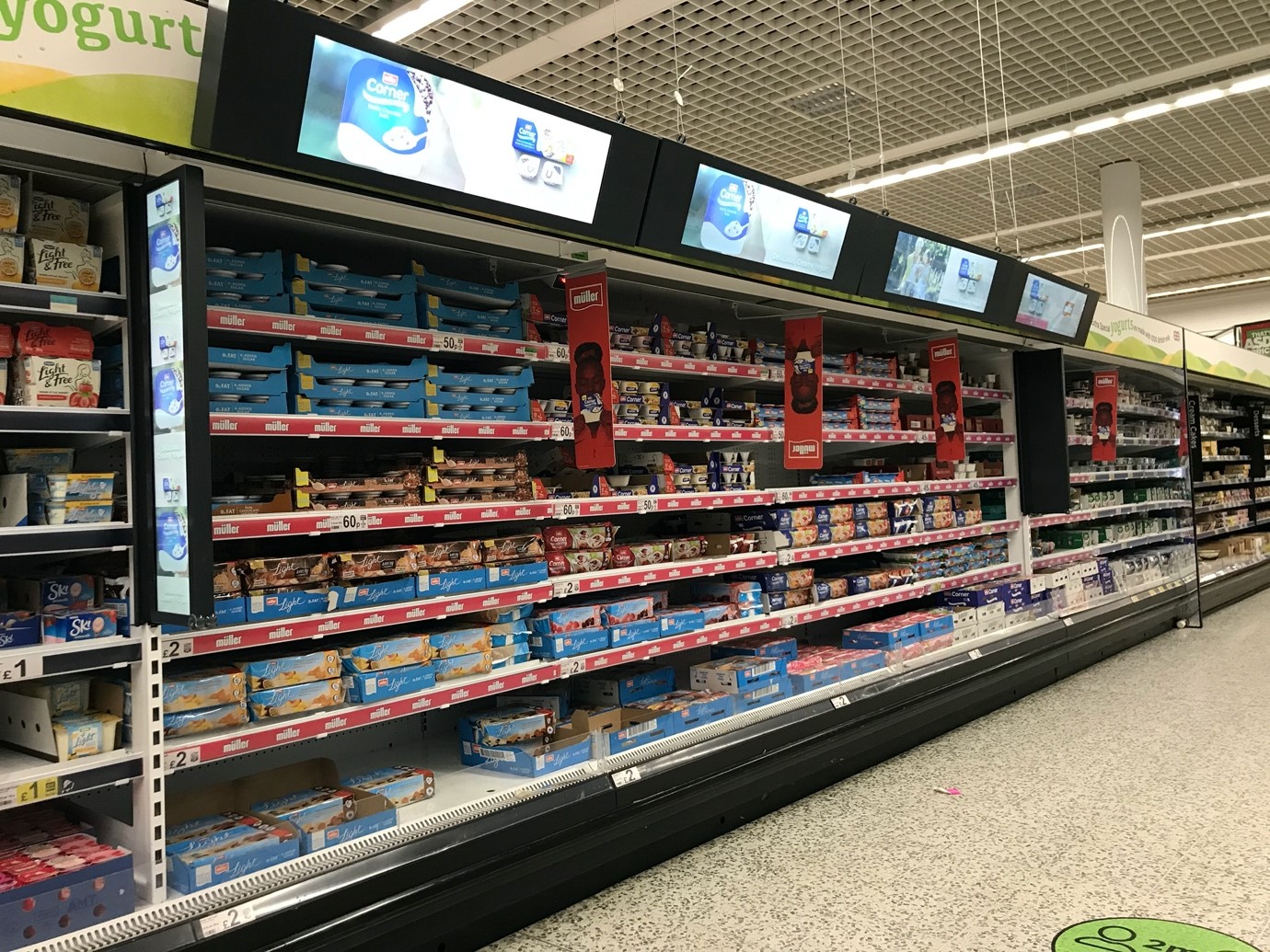 While there have not so far been any results published from the results, such as sales uplifts or evidence of brand-switching, at the very least digital signage makes otherwise humdrum fixtures more eye-catching and we noted positive responses from shoppers while we were instore. The signage is informative and provides calls to action in terms of purchasing, so in theory, it should generate some positive impact on sales. 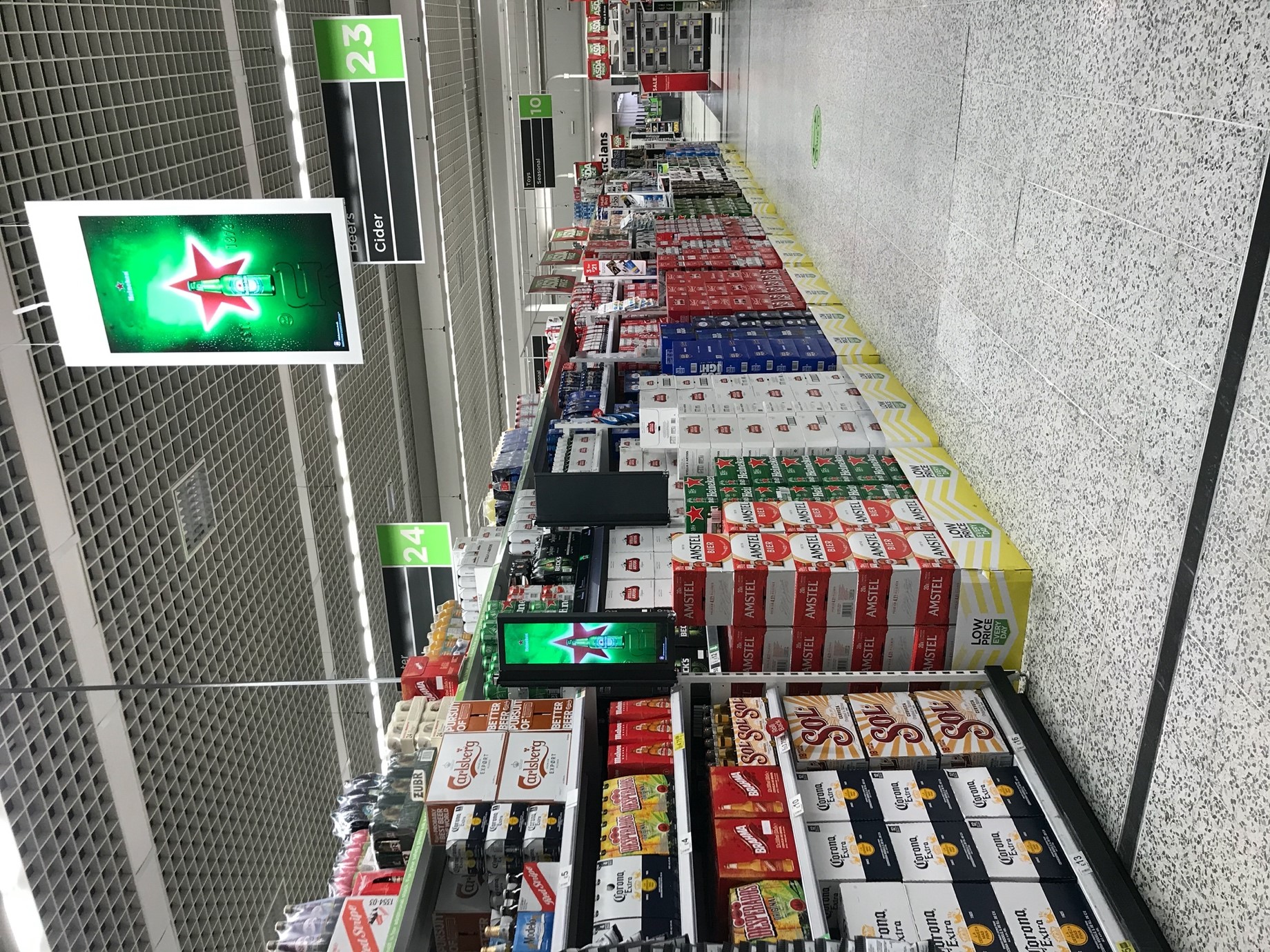 Stevenage is just one of many Asda stores that has also received more substantial adaptations, changes powered by the combined objectives of reducing headcount, soaking up excess space and providing differentiation. A frequent refrain from supermarket executives is that they need to provide more ‘reasons to visit’ their stores and also that they need to differentiate from their competitors.

Asda has identified the introduction of third-party brands into its stores as a way of achieving all of these objectives. In food, Asda has brought in brands like Greggs, Haji Baba (Halal meat), Delicja (Polish deli), Veelicious (vegan deli) and Panku (Asian street food) that have been used to replace Asda-owned and -operated counters.
In general merchandise, the same process has been underway: the retailer has carved out excess space in its GM departments, or removed its own relevant ranges entirely, to host other retailers including B&Q, The Entertainer, Claire’s Accessories and Decathlon. This strikes us an eminently sensible strategy – both in terms of basic store economics as well as enhancing appeal to shoppers. Retailers have to pick their battles: for those categories they feel that they cannot thrive in, it makes sense to either withdraw gracefully or hand the category to someone who can do it better. 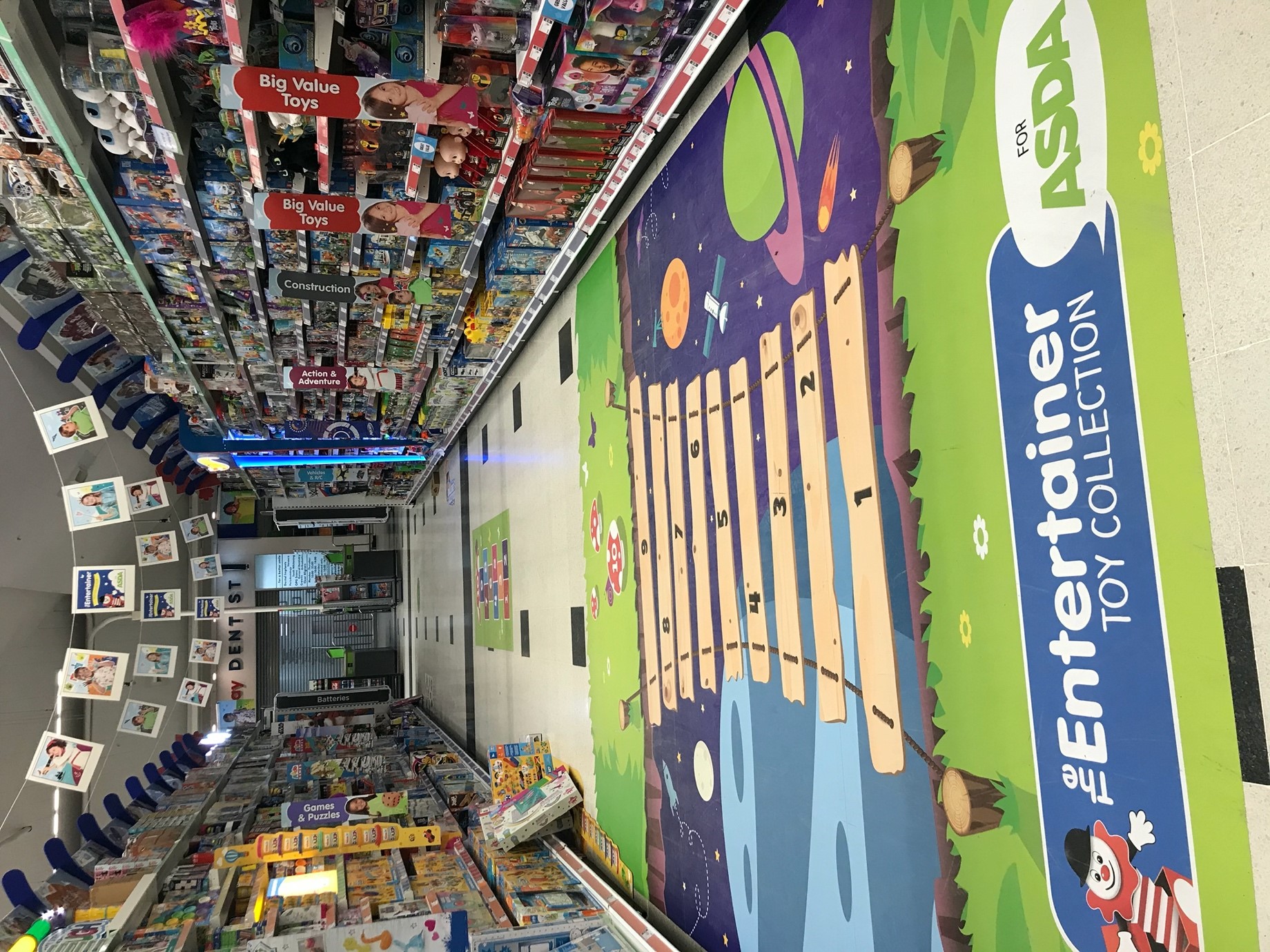 Another couple of other recent innovations have also piqued our interest: one is a slightly risky bit of remerchandising while the other is a genius move with customers at its very heart. The former has seen Asda reorganise its wine departments by grape rather than by country/region, as it believes that pilots show that shoppers have become much more knowledgeable about wine during the various lockdowns. This is a brave move: supermarket CEOs have noted that their complaints inboxes are dominated by two topics: moving stuff around instore and delisting items. Previous attempts to reorganise wines (Morrisons did it by price point a few years ago) have proven unsuccessful, so it will be intriguing to see if shoppers like the changes, and Asda perseveres with this approach. 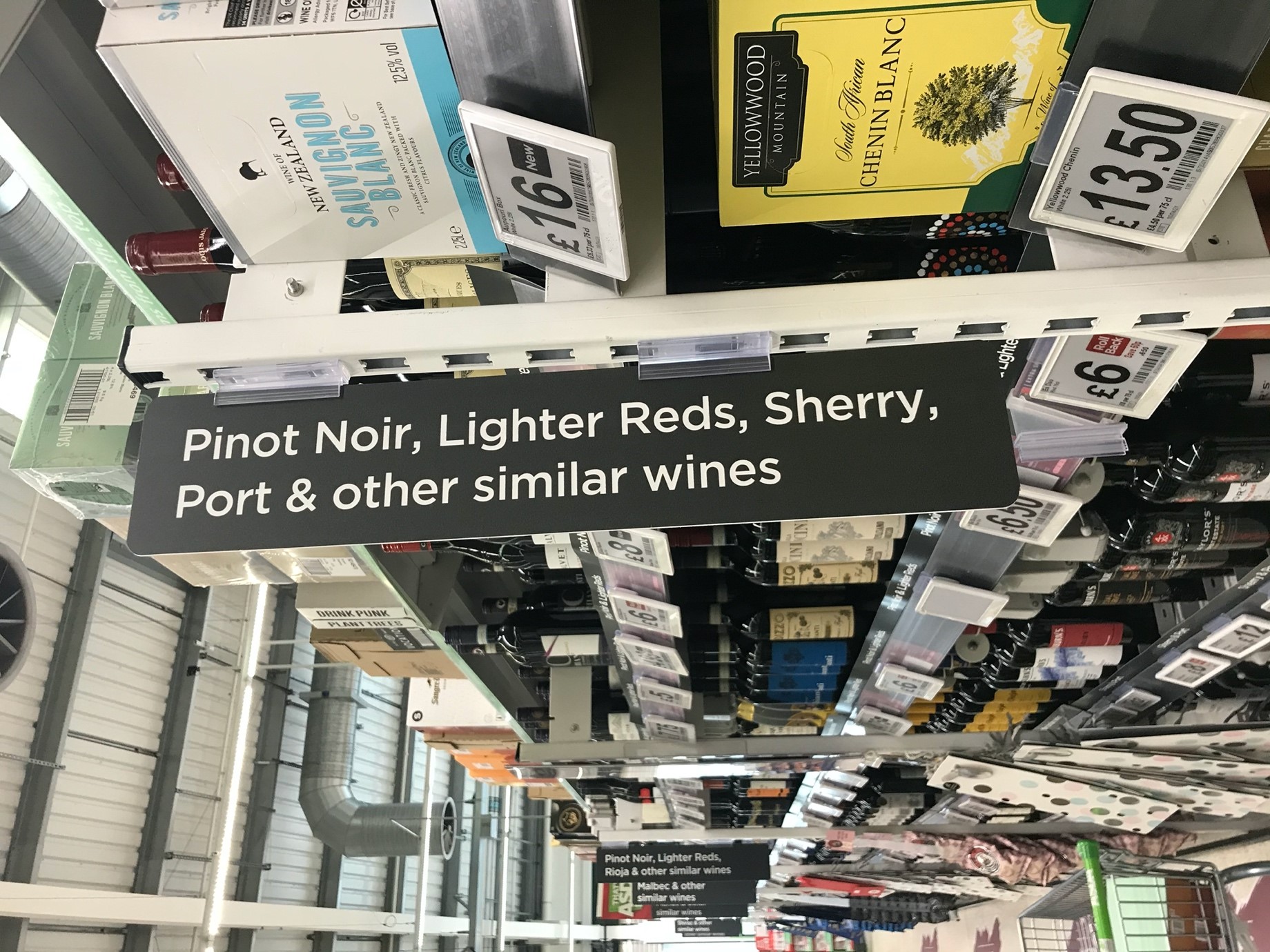 The second innovation is fantastic: Asda has become the first supermarket retailer in the UK to offer clothing specially designed for children with specific or sensory-sensitive needs such as autism, through its Easy On Easy Wear range. After conducting extensive shopper research, Asda discovered that 80% of parents of children with specific needs say that it is difficult to get their children dressed every day. Following feedback from parents, Asda has launched the new range which has seen fiddly buttons replaced with easy close fastenings (although mock buttons ensure they look just like the regular range). Meanwhile, all the clothing has softer thread used on the seams and care instructions are printed on the fabric rather than using itchy or uncomfortable labels. Elasticated waistbands make trousers easy to put on, and ensure they are extra-comfortable. This is a lovely example of talking to customers and putting them at the centre of innovation.